Dr. Ben Plummer got his PhD at the University of Michigan focusing on motivation and gameful learning. Now he works as a learning experience designer for the Ross School of Business, designing courses for their online MBA program.

Dr. Mika LaVaque-Manty is the director of the Honors Program in the College of LSA at the University of Michigan, and also a professor of political science. He is trained as a philosopher and has been working a lot on questions of autonomy and agency over the last 15 years.

An Introduction to Motivation in Education Helping students to meet these needs can help them rediscover the inherent motivation to learn that we as humans are all born with. This may sound all warm and fuzzy, but why as educators should we care about this? Dr. Plummer explains, ”The reason we want to do this is because studies show (just a subset is shown here) that need satisfaction in education promotes positive academic outcomes like increased persistence, achievement, and classroom engagement.”

Grading has been a standard in education for a very long time and is a strong example of extrinsic motivation. Dr. LaVaque-Manty explained that Yellowdig has been one of the best ways for him to take that extrinsic motivation students are accustomed to in education and incentivize them to engage in practices that will be meaningful to them, which has helped his broader gameful pedagogy.

What exactly is gameful learning? 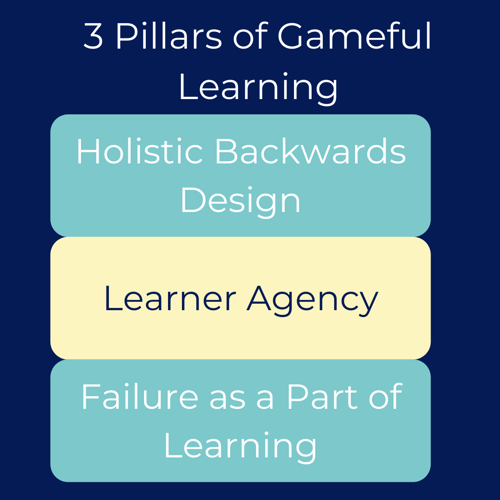 So, what makes it different from a term many use often, 'gamification'? Dr. Plummer explains, “What we found is, unfortunately, the term gamification has sort of become an umbrella term to refer to any environment that's been redesigned to look or feel like a video game, independent of what the underlying goal might be. So we want to distinguish between things like simply calling assignments quests, or giving students an achievement badge for just completing required assignments, things that don't really change the actual learning environment, stuff that's more surface level, so to speak, we want to distinguish between that and gameful course design or the more fundamental transformation of courses around these three pillars.”

Dr. LaVaque-Manty shares a brief overview of how he structures his gameful classes with what he calls an “additive motivational structure.” Students in his classes start out with 0 points and then accumulate points throughout the semester, instead of starting at 100% and gradually losing percentage points with each assignment. The idea behind this setup is that anything students do in his class they learn and earn something. It may not go as well as the student had hoped, but they still come away from the task learning something. This is what Dr. LaVaque-Manty calls “safe failures,” which he explains give students the ability to take risks. You’re never going to make that really difficult goal Dr. Plummer talks about if you don’t miss quite a few times first, right? The students in his class are given multiple options to reach their goal grade instead of the typical singular path. He explains, “So when you talk to video gamers, ... if they complain about a game, they say that game sucked, because it was totally linear. And if you think of a conventional course, those are very linear. I teach material where I have the luxury of having lots of different ways of getting to my learning goals, which are never exactly specific kinds of competence or information mastery, but ways of thinking, so it's easy for me to develop multiple paths to achievement.” 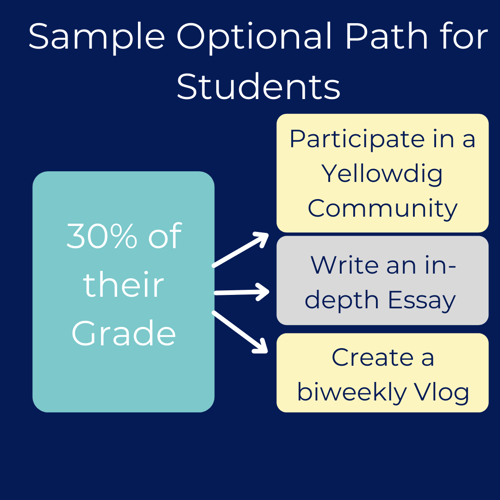 The good news is that Dr. Plummer points out you don’t have to dive in 110% the first time you implement gameful learning into a course. If you make it hugely complex, students can get confused, especially if you as the instructor are constantly adjusting the rules of the course or are unsure of them yourself. Yellowdig’s Head of Client Success, Brain Verdine, Ph.D. confirms this as he has seen many student support tickets on Yellowdig when an instructor moves the goal post mid-semester. A gradual transition over a few terms is completely acceptable, slowly adding gameful elements that make sense with your subject. For example, you could implement an optional path for students to earn 30% of their grade like participating actively in a Yellowdig Community, writing a paper relating to current events, or recording a biweekly vlog connecting to class topics. 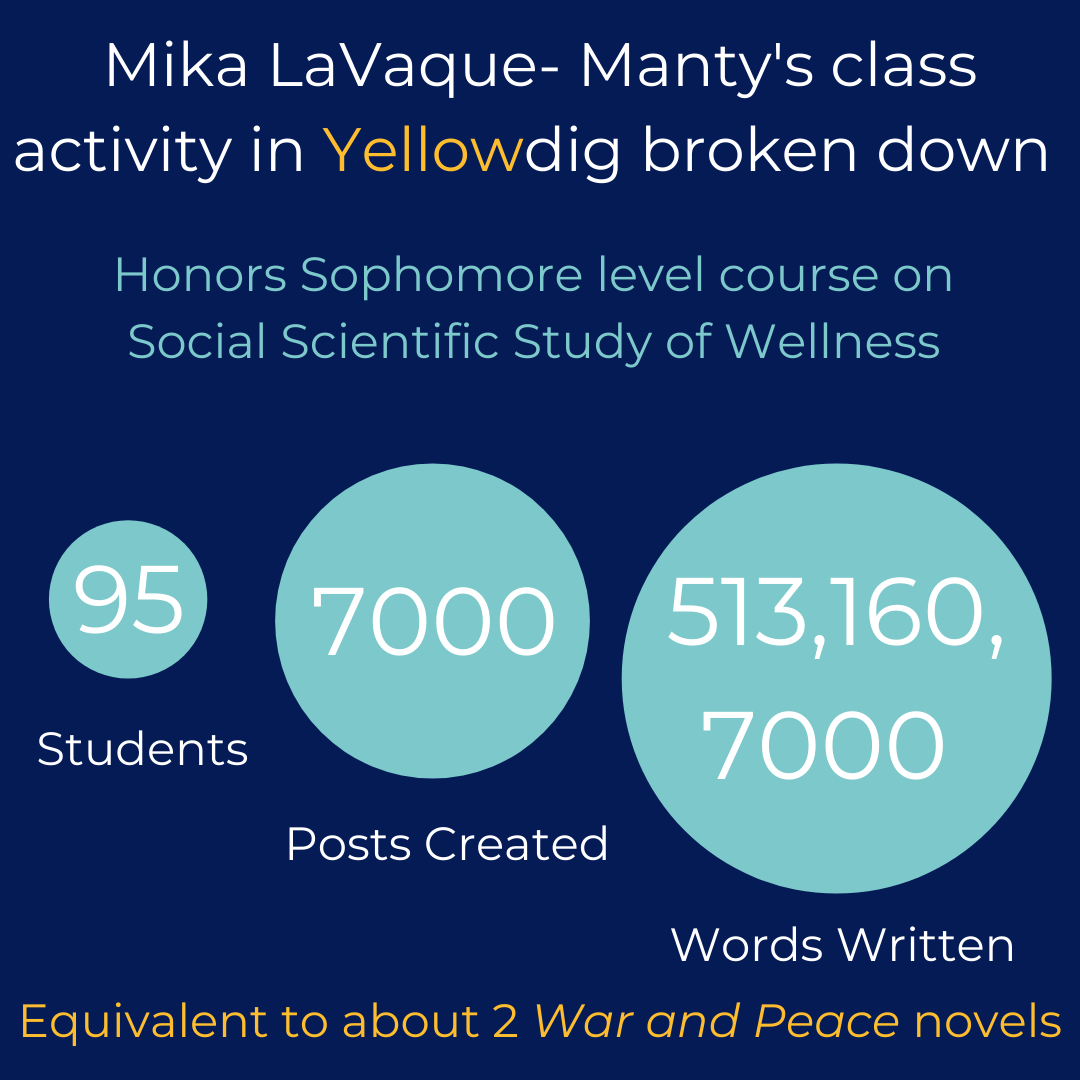 Dr. LaVaque-Manty points out that he cares a lot about the quality of his student’s writing, and he believes that doesn’t run counter to his use of Yellowdig. Writing is one skill that he believes practice is critical for. He explained, “It's not always good words. It's what writing pedagogical calls, low stakes assignments, but it's really great to see them do that.” The autonomy and learner agency he gives his students is a critical element to gameful learning that drives student satisfaction and learning from failures. He continued to elaborate that giving autonomy leads to generating relevant insights, “So instead of seeding posts, or telling the students like, here's my, my seed post, you know, comment on this, just telling them to write about anything that is relevant for this course, it actually works much better. It's particularly important during this pandemic, and remote learning where students feel like they lack structure.”

Do students really buy into the gameful structure?

When most professors are considering adding gameful elements to their course design, they tend to question how students will respond to the uncommon approach to education. Labeling a class as a class that uses gameful learning can create some polarizing emotions for students who expect it to feel videogame-like. The student who spends most of their free time playing Counter-Strike may perk up, while the working parent squeezing classwork into their busy schedule may get a bit annoyed. Yet, if executed correctly, all students feel a benefit from the way the design motivates beneficial behavior. Knowing this, it is very important to think about what you want to do with your course. Simply calling your midterm a quest is not a proper way to implement gameful learning. Verdine shares, it is important to ensure you don’t get too gameful or playful, making it feel too kidlike or not serious enough for a college environment. Dr. Lavaque-Manty adds that with so many students across the world with different hardships facing them, it can be insulting to have too cutesy of a course design. He points out that Yellowdig achieves the right balance of adding a gameful element to a class, without making it feel out of line with a high level class.

To prevent any confusion down the road and to eliminate any preconceived ideas about a gamefully designed course like it being too elementary, it is critical to explain how the class will differ from typical classes upfront. Dr. Lavaque-Manty emphasizes that instructors should talk about the class’s unique structure, not just once and especially not just in the syllabus. For instance, if you decide to use a similar gameful design to LaVaque-Manty, you will want to forewarn students that their final grade around Thanksgiving time may not be what they are expecting and it is not a reason to panic.

Many professors think that lots of students will try to game the system. Dr. LaVaque-Manty’s take on that is, “If you game your course, you should be prepared and accept the fact that students will game the system. So sometimes, they will game it in ways that doesn't achieve your learning goals. But if you encourage them to think creatively, and strategically, then as long as you spend some time thinking carefully about your design, when they game the system, they get what you want them to get out of the class.” It’s also something that has the potential to change as the course progresses. A student may start out the course doing the bare minimum and trying to game the system, but as Dr. LaVaque-Manty found with Yellowdig’s gameful approach, “They began cynically, and, and then, the conversations among their peers ended up being the thing that gave them the motivation.” 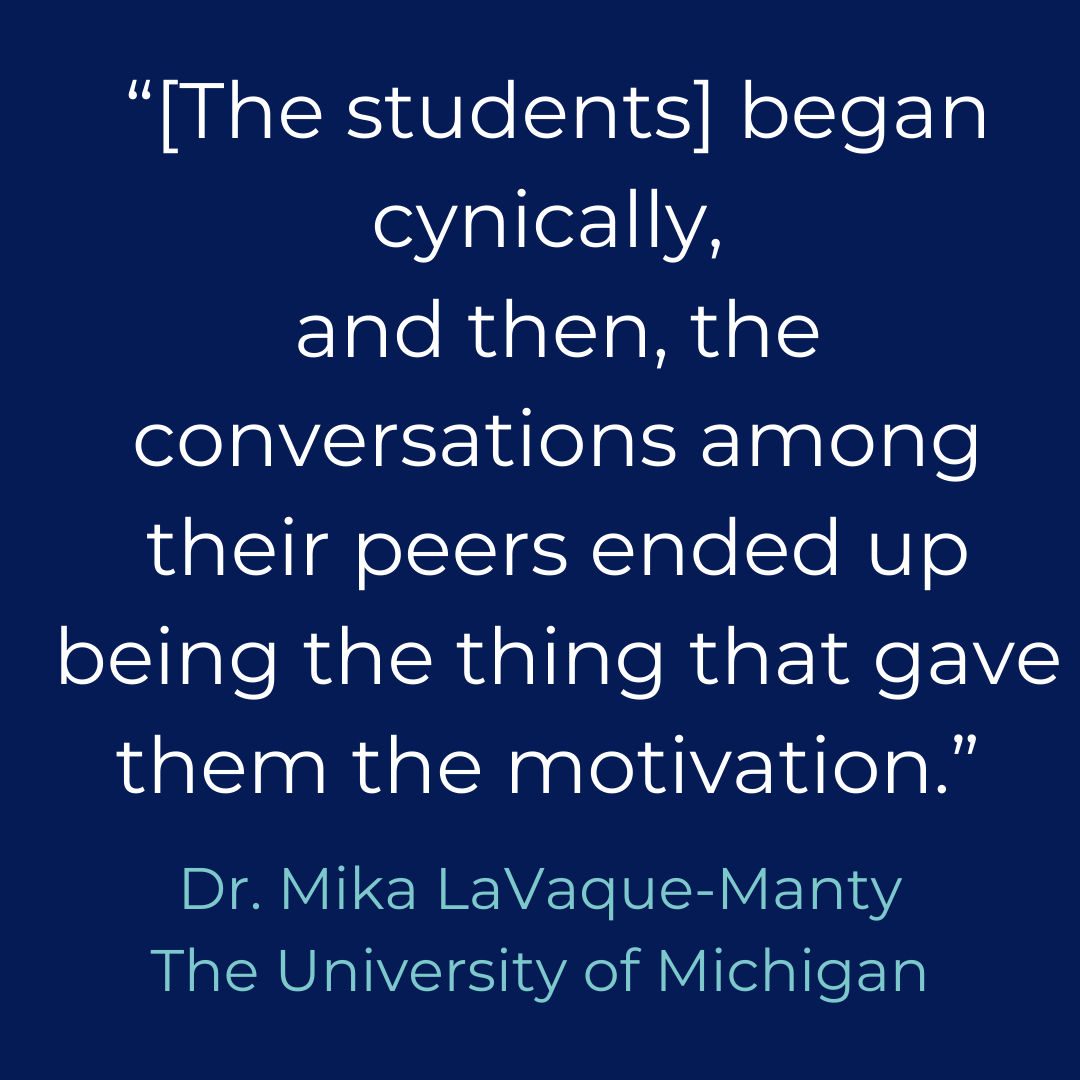 Yellowdig has an intentional design where students get emotionally rewarded from participating in conversations, thus decreasing the motivation to phone it in. As our Head of Client Success explains, “They don't have that much motivation to actually try to game the system. If, participating in these conversations is rewarding in and of itself, and the things that are there are interesting, and students feel like they're learning, they don't have nearly the motivation to try to cheat that system. And I think that's largely what we see in practice.”

What does gameful learning have to do with building Community?

Adding gameful elements to your class may not seem like a great way to build community among students, but actually there are many ways to encourage students to engage with one another through specific gameful elements. Dr. Plummer shares,  “We've used Yellowdig in a number of our online MBA classes, and these are fully online students who have always been online, and they sort of crave that sort of incidental interaction, you know, you pass your classmates in the hallway, and you you chat about something, or talk about how your fields intersect. And so leveraging Yellowdig, as a way for students to do that, in the context of different classes has been a really powerful tool for us." The exciting news is that even though students only earn points up to the threshold set by the instructor, Dr. Plummer found many students were going above and beyond that threshold, " And so their continued engagement in the community is really just motivated by that interactive component.”

Instructors have found that the conversations that form initially due to students aiming to earn the required points, morph into real interactions driven only by the students’ desires to learn and interact with their peers. Many instructors wonder how important it is for them to read every post for quality and to provide feedback. While it is important to have a presence on Yellowdig, students will monitor themselves and only interact with posts that add value to their Community. Yellowdig tends to produce more content than traditional discussion boards, so having one person attempt to read them would be very difficult and surprisingly unnecessary, as Dr. LaVaque-Manty shares his insights into how often an instructor needs to interact with students on Yellowdig, “It doesn't have to be sort of overwhelmingly comprehensive with even 95 students, I could not keep up with everything the students were posting. And I found that they actually didn't care. Sometimes I felt like, you're supposed to think I'm cool. And they were like, who cares about Mika, you know, it's like, let's talk amongst ourselves.” Ultimately, using Yellowdig as a gameful aspect of your teaching can help to eliminate some of the burden of grading, while also making the time you spend reading posts and comments from your students more valuable, as they will be more unique and relevant than if every student were responding to the same prompt.

Looking to get started adding a gameful element to your course? We'd love to connect!

Have any questions? Don't hesitate to reach out to learnmore@yellowdig.com.